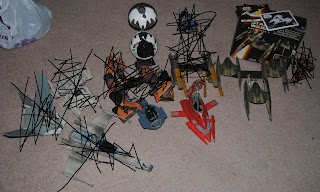 Ok we've got a lot of items kicking around the AFE hangar bays and we thought we'd clear some space for some more donations and maybe a few new figures just for the Empire.

These items are perfect for collections or customs!

1 Jabba The Hutt figure with opening mouth, removable head, and frog(s) to eat (from Episode 1 Jabba with green slime)(slime not included) $4

1 Pod Race Viewing Screen accessory.(free with purchase of a figure)

Let me know if you want any of these!

Also have a Marvel Ultimate Alliance game for PS2 ($20 game is in great shape), Hundreds of comic books (image, marvel, DC, valiant, etc.), and some Thomas the Tank Engine Toys :)

Will proved a detailed list of the comics, photos, and prices can be provided upon request. The same for the

Will trade for Star Wars figures/vehicles or sell for cash via Paypal. Thanks!
Posted by (S)AFE at 9:14 AM