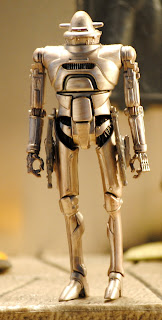 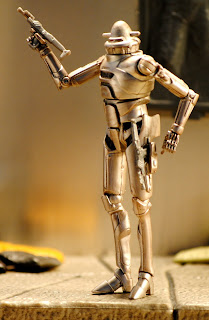 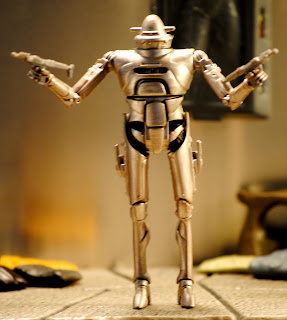 IG-88 the deranged assassin droid who overrode his primary programming becoming a bounty hunter, killer, and psychotic egomaniac, feared the galaxy over. This awesome figure is rendered beautifully in a style reminiscent of early 20th century pulp sci-fi movies. Like Robbie the Robot and Mort from The Day The Earth Stood Still with a touch of West World Thrown in. He's a tin can with built in gunslinger holsters sculpted right into his legs. Based on early sketches of what was referred to as "The Chrome War Droid" this figure gives us yet another amazing collectible based on the imagination of George Lucas, Frank McQuarrie, and the drafters of the legend that is Star Wars. An excellent figure, fully articulated, with rotating robo-head, and twin blaster pistols this droid looks great in any scene, whether it's Jabba's palace, the Cantina, or in the prequels fighting Jedi on Geonosis. Available as part of the build-a-droid series in The Legacy Collection. Grab this guy if you're a fan of classic sci-fi, concept figures, or just love droids! Highly Recommended!
Posted by (S)AFE at 8:52 PM