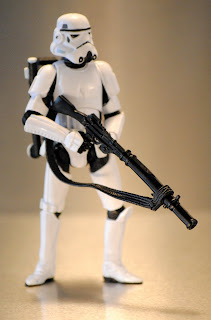 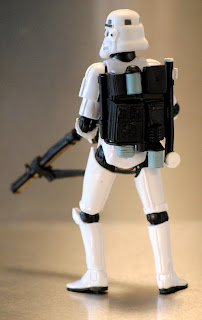 Little is known of the Stormtrooper deisgnated "Wampa". Named for the towering, deadly ice beasts of Hoth, he was part of the troopers hand selected by Warmaster Graal for the ranks of Raptor Squad. A soldier of few words, Wampa is a hardened trooper. He served  three tours of duty as a riot guard at the Imperial prison on Lok. Aboard the Star Destroyer Oppressor he served as a hangar bay guard and ran point on three seperate boarding raids on captured vessels. Before he was selected for Raptor Squad Wampa was stationed on Ord Mantell as a riot guard in the cantinas. Despite his military record serving for the Empire, Wampa's life remains a mystery. As far as anyone can tell that's how he likes it.
Posted by (S)AFE at 3:11 PM