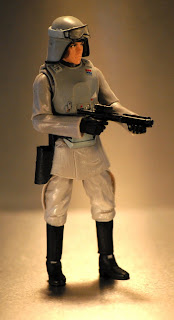 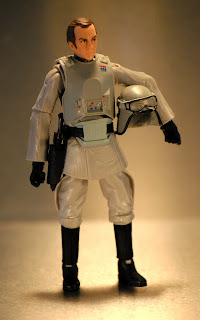 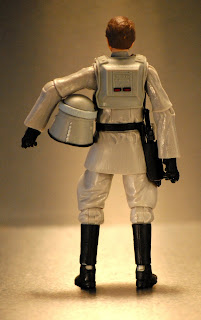 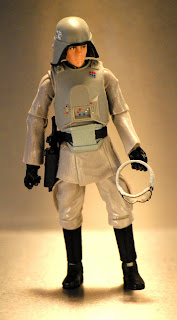 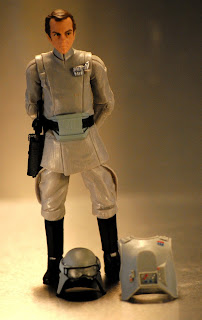 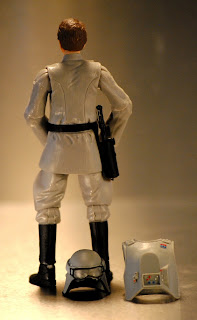 One of the most powerful and infamous Imperial vehicles, the AT-AT is all but unstoppable. Instrumental in turning the tide against the Rebels during the battle of Hoth, the AT-ATs commanded by General Veers as part of Blizzard Force the AT-AT (All Terrain Armored Transport) are armored behemoths that combine armored troop carriers, mobile artillery weapons, and battle field command centers. Holding up to 40 troopers, 2 pilots, a commanding officer, a technician and mechanic and 2 speeder bikes, AT-ATs can cut a swath into any enemy defenses--no matter how well dug in--and supply reinforcements to the battle. While General Veers is the only AT-AT commander we see on screen, he couldn't have been the only CO (commanding officer) in charge of an Imperial walker. There are at least 5 AT-ATs in the Hoth sequences, if not more and there must have been other officers aboard them reporting to Veers. Hasbro's AT-AT commander comes to us from the Vintage Collection's first wave for The Empire Strikes Back. He features a removable Imperial CO helmet, removable goggles (with translucent lenses), a sculpted on wide-armored Imperial belt buckle, A removable full armored officer's chest and back plate (unlike the Veers figure that featured just a snap on chest plate), and an E-11 blaster with a sculpted on working holster. This figure looks amazing! Whether he's commanding his own AT-AT, or piloting a flagship AT-ST. Whether he's taking part in the battle of Hoth, or on Endor. This is a versatile figure in that he's not based on an onscreen character and thus his story can be yours to create. One of the few generic Imperial CO characters released so far. Definitely get him and maybe some extras for all your armored Imperial vehicles! Highly Recommended!
Posted by (S)AFE at 9:32 PM