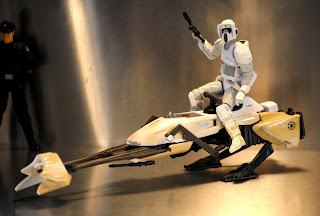 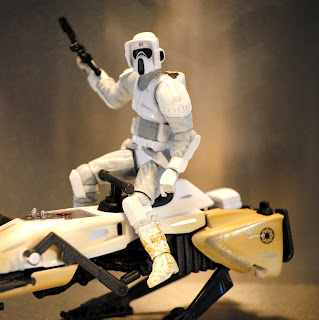 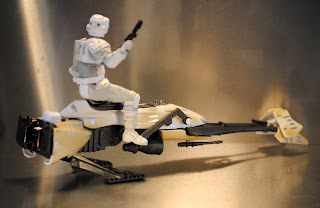 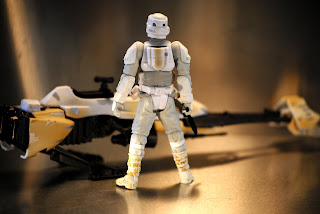 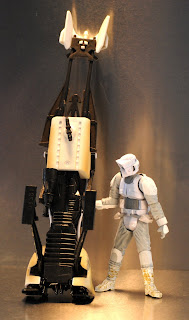 "What does this button do?"

This Imperial Scout Trooper and his awesome Hoth deco speeder bike are from the Star Wars Hoth Assault Battle Pack. They came packaged with a Darth Vader figure, a Snowtrooper, and an E-web mounted blaster canon. These figures are all repacks, but despite that, this Hoth armor Scout Trooper is pretty sweet. He shares shoulders and legs with the Snow Trooper in the pack and the rest is standard Scout Trooper figure--only with a more gray and white paint job. The speeder bike is a pretty solid vehicle over all. Modeled on the POTF2 speeder bikes that popped apart (those were so awesome!) this bike is a single solid piece. It features moving landing struts connected to two rear braking panels. The Scout Trooper controls the bike via two swivel control bars and the center handle bar pulls up and pops down with a spring. Under the bike there's a swivel blaster canon. The battle pack makes a great "troop/scene builder" and can add some missing figures to your Hoth scenes. The only drawback to the speeder bike--and it's an aesthetic one--is the fact that the weathering in the paint scheme is very poorly done. Looks very "slapped on" and unrealistic.  Definitely worth searching for--there may still be a few left on the shelves trying to be moved. Pick this awesome vehicle and Trooper up! Recommended!
Posted by (S)AFE at 7:12 PM