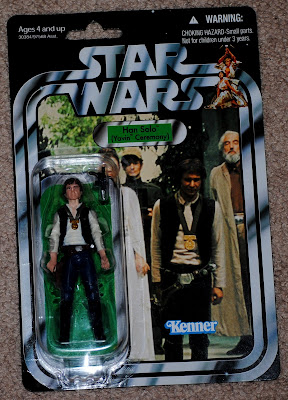 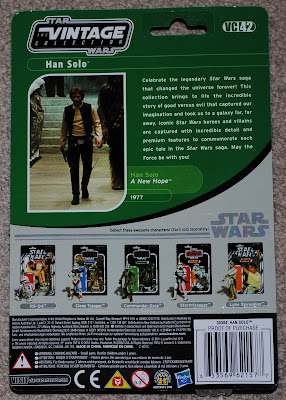 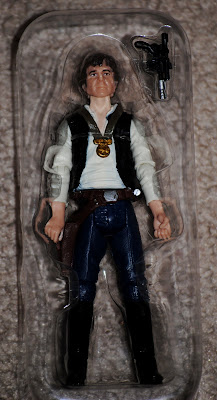 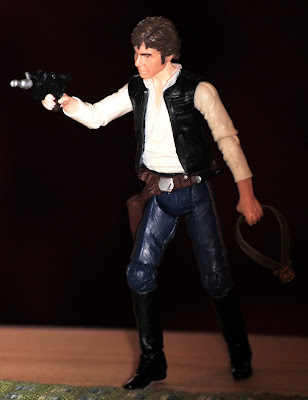 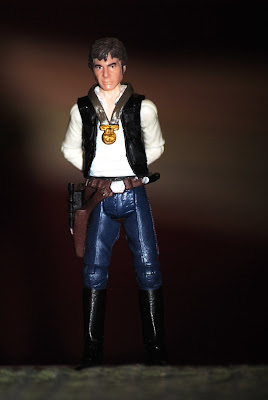 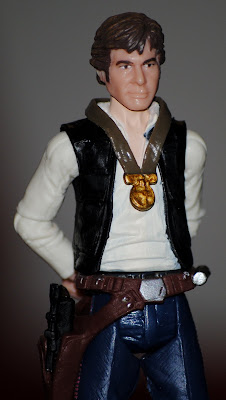 Went to check on the local stores with toy sections to see if any new Star Wars Vintage Collection waves had appeared yet (hoping that they had) and to my disappointment they still hadn't. Having worked briefly in chain-store retail I know that they get in the new waves early and let them sit on the back until the day of their intended release date. Bastards. But luckily I found Mr. Solo here, perhaps someone opened a pack of the new wave thinking it was a saga legends pack (which were stocked to the gills still) and put the (6-10) packs on the pegs. It was February 28th, the day before the march release date that Hasbro set for their next waves. There must be another collector or two in my area cause this Han was the only one on the pegs from ANH. There were a couple of orange Utapau clones, some white clones (with removable helmet), some Anakins, some Vaders and Dengars and other figures from the first wave of the vintage collection. I checked a few stores in the area and this was the only one between them. That's ok with me though, I only wanted this Han, the ANH Luke, and R5-D4 figures from that selection. This Han figure is based on the ANH Han Solo figure from the Legacy Collection that came with a stormtrooper belt, stormtrooper chest plate, and stormtrooper helmet. Not a terrible figure, very possible, very skinny, and a very un-Harrison Ford head sculpt. The Vintage Collection version features a new more "Han Solo Smuggler" belt and holster (very detailed and a great paint job on it, featuring an affixed comlink) and this time the Alliance Medal of Honor (which is what I wanted this figure for mostly). It also features a very detailed DL-44 blaster pistol with a painted brown grip and a silver barrel. So much nicer than the chunky black solid piece blasters of the Power of the Force line. This figure gives us a nice Smuggler Han Solo with the option of awarding him the medal, if he deserves it ;)
Posted by (S)AFE at 7:58 AM