Because Adam Fett asked for it: 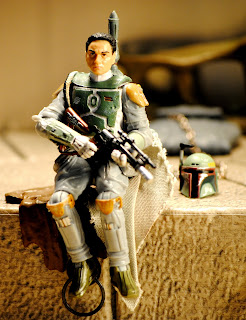 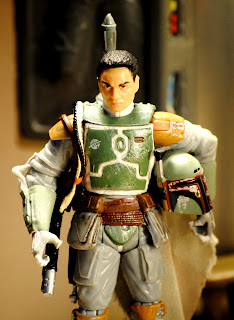 Adam Fett, a huge Boba, Jango, and all things Mandalorian and Fett fan wanted to see Boba with a new head. A head that looked more like his father's (wait isn't it his face too?). The TVC Boba Fett's face looks kind of squashed into the white balaclava and it's a bit expressionless. Where's the sinister bad ass bounty hunter face? Turns out it's under the Imperial Tie Pilot helmets. Yep. Hasbro is releasing Tie Pilots from ROTJ with clone heads. Which makes no sense canonically because, as we know, the Empire stopped using clones in their ranks long before ROTJ. The clone heads are also under the stormtrooper helmets, and Snow Troopers, and AT-AT drivers. This Tie Fighter head on Boba has the mean sinister looking scowl that should be under his helmet. Not the clueless guy in the white balaclava. Unfortunately the helmet doesn't fit over the new head. Probably cause it's too cool looking to be covered up.

Thanks for the request Adam Fett. This was a great idea!
Posted by (S)AFE at 4:02 PM