All Terrain Armored Transport of AWESOMENESS! 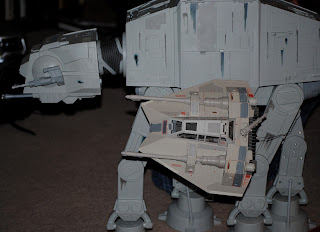 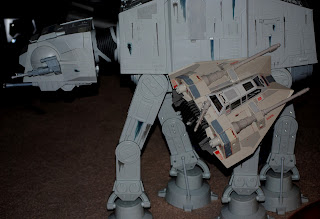 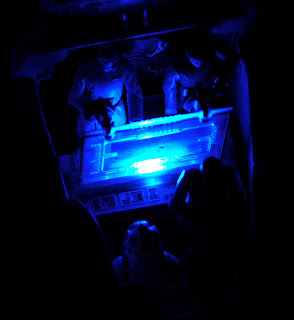 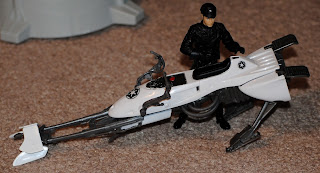 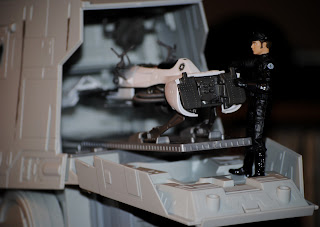 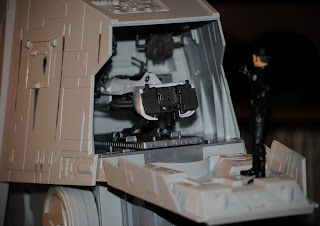 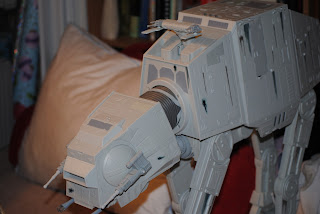 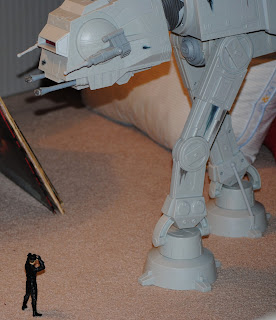 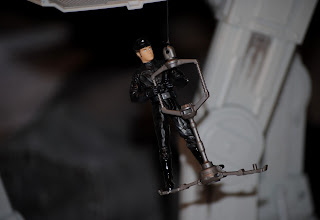 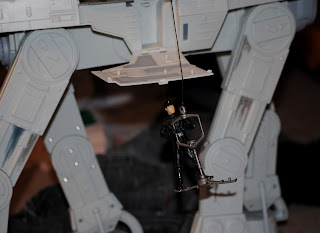 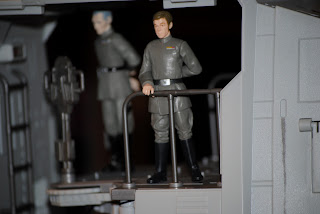 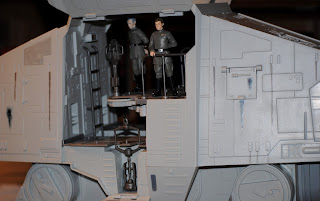 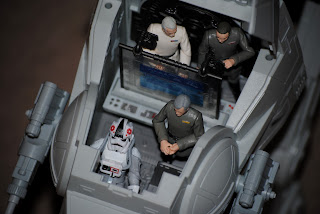 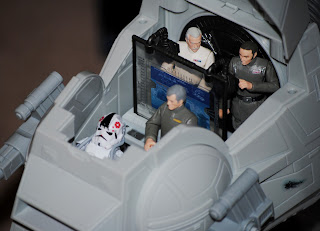 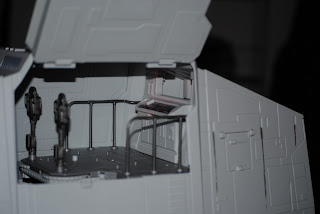 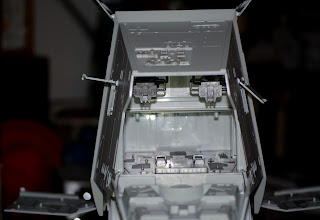 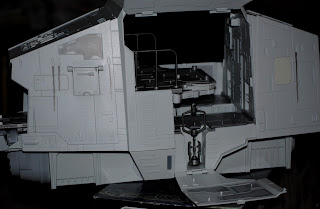 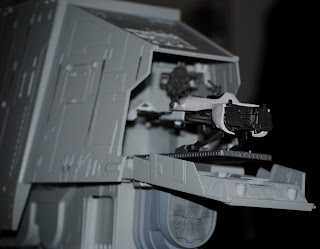 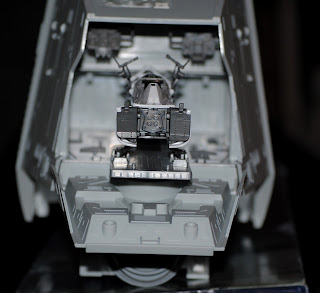 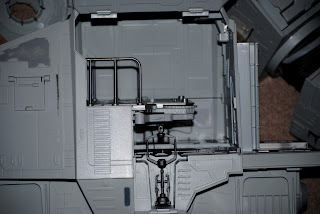 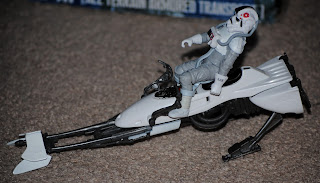 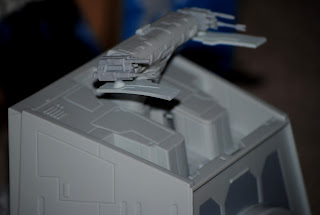 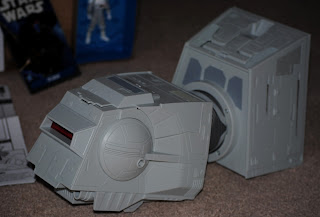 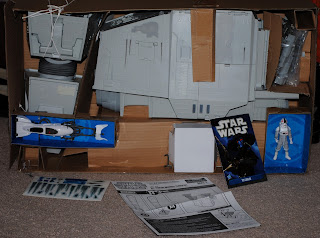 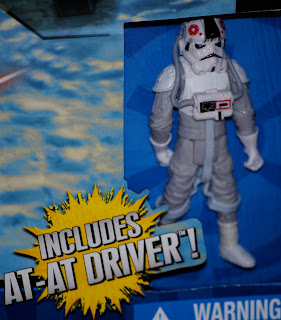 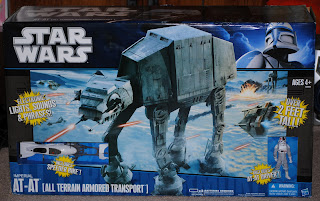 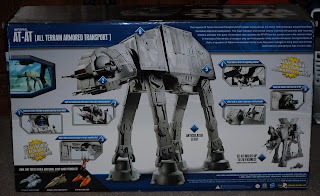 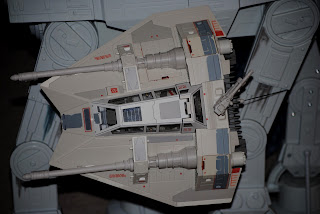 I stopped by the local Walmart to pick up a couple of new Vintage Collection figures as the new waves were finally (FINALLY) hitting the shelves! On the pegs I found a Kit Fisto, tons of sandtroopers, some Darth Vaders, some Dengars, A new Jango (with poncho), a Zam Wesell, an R5-D4, and a ton of Utapau Clone Troopers. I selected a few figures and was ready to leave when I noticed the red "mark down" tag on the lowest shelf. "$49.00" It had to be a signage error, which you find a ton at Walmart and they may or may not give you the item for the wrong price. On closer inspection I discovered the $49.00 tag to say "SW ATAT" under it! Huzzah! But I had to be sure, I stopped the nearest associate and asked him to scan it. It rang up $49.00. "Better than the $100 it used to be, huh?" he said with joy. I watched these awesome vehicles warm the shelves for over a year. Waiting. Watching. Waiting for them to be marked down. To have them now be less than half price is amazing! I recommend you head to your nearest Walmart as fast as possible :)

I'm not sure there are words to accurately describe how incredibly awesome this vehicle is! Whether you're a fan of Hoth, or Endor, or you want to create other Imperial campaigns not seen on the screen before, this vehicle is incredible! It hold OVER 35 FIGURES! The cockpit alone can hold 8 figures! 2 pilots, and six troopers or Imperial Officers! This includes a large clear view screen with images of the Rebel Shield Generator as well as two mini targeting view screens. The large clear screen lights up with the press of a button located on the command console with  blue flashing lights and plays many phrases and sounds including General Veers' lines from ESB. There are two missile firing "ear" cannons, 2 light-up clear-tipped "chin" canons with oscillating firing action, real lights and movie accurate blasting sounds. A movable, pose able neck incased in a flexible rubberized tubing with mechanical looking detailing. Above the neck there is a pop-up turret with two armored swiveling laser canons (not screen accurate) but heck still awesome! These canons are mounted on a pop-up carrying handle that drops the head down lower when popped out. Next is the main cabin features on both sides, two pop-out fold up large side panels and two pop-down large side panels that can be used as a stand for troopers with 4 foot pegs on each side. There is also a winch and pulley on each side complete with a troop caddy that features 2 foot pegs (one for each of up to 2 troopers at a time) and 2 handles. The winch has an easy drop down button and a winding gear that can be used to raise or lower your troopers. Inside there are two guard rails, a command console with another button, an in-cabin red "warning/landing" light, and many sounds and phrases when button is pushed. There is also a rear view port into the rear portion of the AT-AT cabin/body/interior, allowing figures to see into the aft portion of the vehicle. There are two standing control consoles with 2 mini view screens and two handles on each. 13 foot pegs within the main part of the cabin, with a working ladder, a pit (the pit can hold about 5-6 troopers ready for deployment) below the command deck with a solid floor portion and a portion that drops down with a hatch. This hatch features a grappling hook on a separate winch that has a motorized ascension to lift the grappling rope up into the AT-AT's interior (belly), or to lift a trooper or Luke Skywalker (so he can cut the belly open and throw a grenade in like in The ESB) into the interior of the vehicle. The ladder and standing consoles are all removable for extra room. There are foor square looking "cubby holes about a centimeter and a half deep in the wall of the cabin (2 on each side) that fit extra trooper helmets and spare equipment. The rear or aft section of the vehicle flips down and forms a platform to hold troopers taking up defensive/offensive gunnery positions and has 2 foot pegs. Within the aft portion there is a speeder garage option with a pop-out sliding panel that fits one speeder bike. The panel can be slid back in for secure travel or popped out with a button for rapid speeder bike deployment. The speeder bike sliding panel also features 2 foot pegs. Within the aft portion there are 6 foot pegs (3 on each side) and two pop-open hatches that open out of the rear hull of the AT-AT for gunnery positions and sniping from cover. These panels are about an inch up and down and a little under an inch wide. One of the 6 foot pegs are near enough to these hatches to secure a trooper there. There are also 2 drop down control consoles (roof mounted) with mini view screens and handles for figures. There is a 5 inch wide and 1-2 inch deep portion (2 inches high) of the rear compartment that is too low for figures to stand in but perfect for large weapons storage (like E-Web Canons). There is a ledge above this space as well to store items an a hollow support pylon on the side of the space for rifles and longer weapons. There is enough room in the aft compartment for about 20 figures (packed tightly) alone. The AT-AT stands well over a foot tall (about the size of a medium to large dog all told) and over 2 feet long (from laser canon tip to tail) with 4 2-piece legs with 3 points of articulation for accurate "walking" poses. There are also 3 buttons on the very top of the vehicle that play additional sounds and voices. When turned on the vehicle will randomly play sounds and light up at random intervals.

Also pictured for size and display purposes is the Target exclusive Rebel Armored Snow Speeder. This vehicle is also amazingly done! It features a two pilot cock-pit, a display harpoon canon and a working canon complete with a missile on a tether that  locks into the body of the Snow Speeder! It also features 2 different sets (of 2) of front blaster canons. 2 single piece display canons and 2 working canons with firing missiles. It comes complete with stickers and decals, pop-open braking panels, a break away engine/firing assemble and opening engine panel. Fold down landing gear, opening belly storage compartment, and a detailed padded/insulated cockpit canopy. Grab one of these and complete your Hoth set!

The AT-ST was an awesome vehicle, this however blows every other 3/4" scale vehicles I have or have ever seen. It is a huge troop transport/dropship type walker, a mobile command center and battle station, a massive mobile artillery weapon and all around blast to set up, look at, and pose. Highly, highly recommended! The Rebels won't stand a chance!
Posted by (S)AFE at 4:01 PM