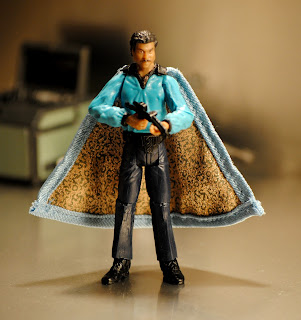 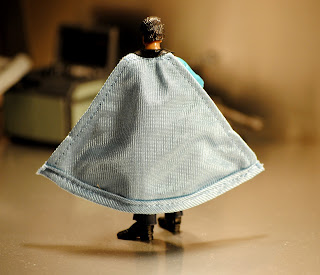 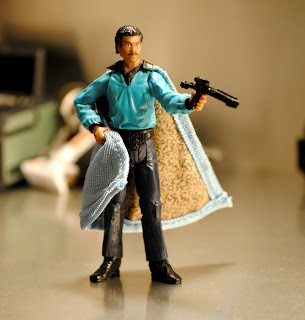 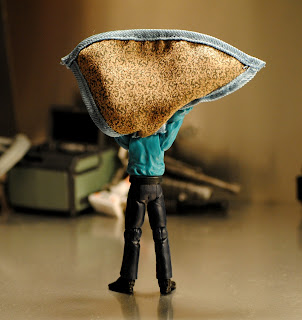 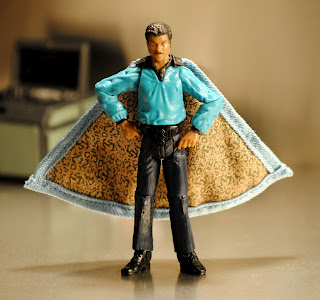 Hailing from the planet Socorro, lando Calrissian is an infamous smuggler, gambler, pirate, swindler, double-crosser, and all around con man. An on-again-off again friend of Han Solo's--at least until they patch things up during ROTJ. In TESB Han scuttles the Falcon--desperately in need of repairs--off to Cloud City on Bespin. Boba Fett guessed Han was heading there so he jumped to hyperspace and arrived before the Falcon. Fett called in the Empire and forced Lando to aid them in laying their trap for the Rebels aboard the Falcon. The Falcon flew right into their trap and Han, Leia, R2, C-3PO, and Chewbacca walk right into--they even have dinner with Darth Vader and Boba Fett. To quote Kevin Smith's debut film Clerks, "Luke gets his hand cut off, finds out Vader's his father, Han gets frozen and taken away by Boba Fett. It ends on such a down note." The rest is history. Lando returns to help Leia, Chewie, and the droids escape and aids in rescuing Han from Jabba's palace. He's made a general in ROTJ and flies the Falcon during the battle of Endor... oh and he helps blow up the second death star. After that he goes on to continue to aid the Rebellion and the New Republic.

Lando is one of the fliest, freshest, smoothest, most suave cats in all of Star Wars. He's the Shaft of space. He's also a downright dirty cheating liar--but it's nearly impossible to hate him or stay mad at him. He's incredibly charismatic and very shrewd. Only Lando could rock the powder blue shirt and cape with gold paisley inlay. This version of Lando Calrissian comes from the Target Exclusive nine figure special action figure pack. He's a repackage from the Vintage Original Trilogy Collection with a few minor details. He has swivel arms instead of ball joins and the figure we have here at AFE's waist swivel joint is a bit over-loose. Not a bad figure at all. He comes with the E-11 blaster he has on screen in TESB, and features a soft-goods cloth cape that really makes this figure stand out. I definitely recommend that you find and acquire the Traget exclusive pack that he came with, or at least get the VOTC version. He goes well with the Bespin Security guards Hasbro released not too long ago. This is the best Lando figure produced yet. Recommended!
Posted by (S)AFE at 10:12 PM