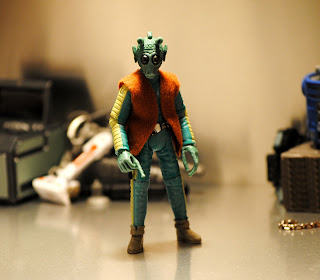 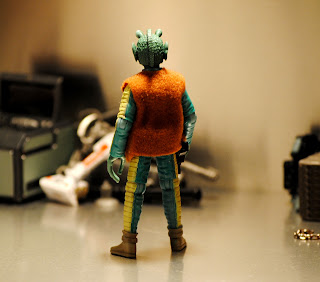 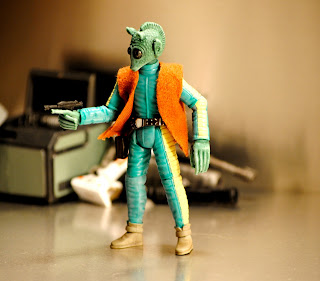 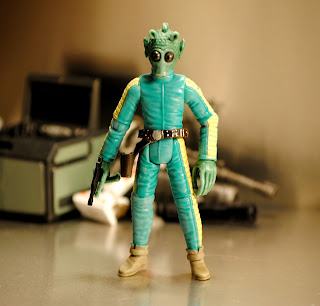 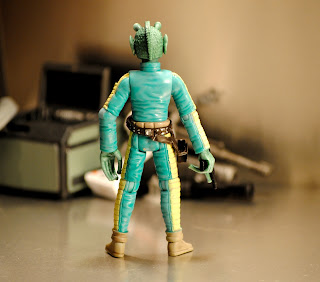 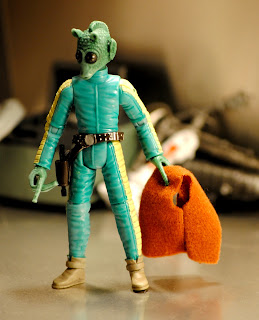 "Going somewhere, Solo?" "Yes, Greedo. I was just going to see your boss. Tell Jabba I've got his money..." Ah Greedo. Did he shoot first? Did Han shoot first? I myself prefer the version where Han shoots first. Makes Han seem more bad ass than having Greedo miss at near point blank range, and have Han just shoot him without looking and kill him. Greedo has been called the "whipping boy" of the Star Wars universe, and frankly it's pretty true. He's one of the worst bounty hunters--if not the worst--in the movies. Outside the movies he seems to have led a pretty mediocre life. Aside from some Rebel Troopers, Stormtroopers, Jawas, Aunt Beru and Uncle Owen, he's one of the first deaths in Star Wars A New Hope. He's the first person (person? Rodian?) we see Han blast on screen and that makes him special in his own, pathetic, green way. "Sorry about the mess." Han says as he flips Wuher a coin in Chalmun's Cantina. As if to say, "This Roadian was worth exactly one galactic credit". The latest Hasbro take on Greedo offers us some great features. This figure was released as part of the latest Saga Legends line and may still be lingering in some stores. I love Greedo's hands--those impossibly long noodle-like fingers that seem to get in the way all the time. His blaster fits right into his firing hand, as well as into his working holster. The sculpting on this figure alone is pretty excellent, they've really captured his big round black eyes. He also comes with his signature orange vest (I swear all Rodians shop at the teal racing suit and orange vest store). But this time his vest is an actual piece of clothing--that's right it's soft-goods and it comes off! Add a heap of articulation and you've got one awesome piece of blaster fodder! Greedo looks great whether he's in the streets of Mos Eilsely, or at Jabba's palace, or being mopped up at Chalmun's Cantina. Highly recommended!
Posted by (S)AFE at 7:02 AM