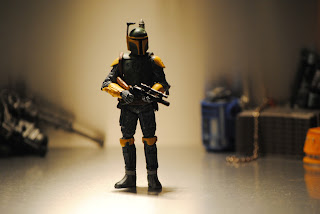 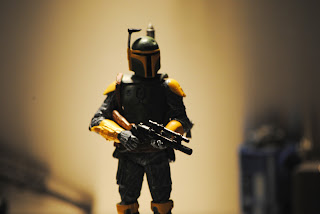 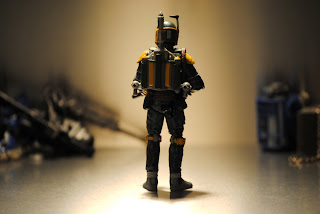 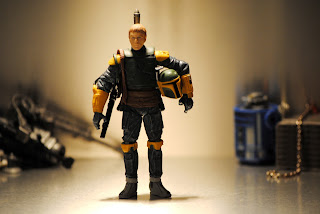 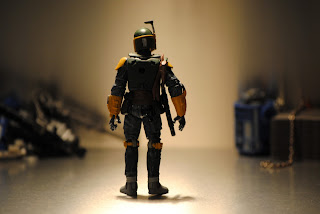 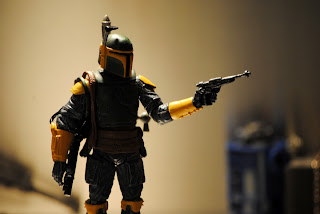 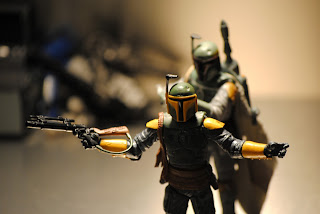 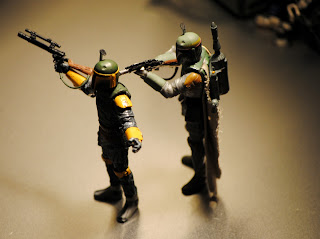 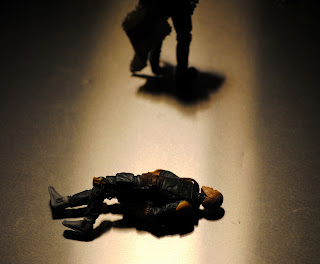 Fett: "One of these vials contains the antidote. If you have the power to get it before your rocket pack blows up, you may live."
Fett [walking away]: "You won't though, you're not me."
Jodo Kast debuted and died in the Star Wars comic book Boba Fett: Twin Engines of Destruction, an awesome story published by Dark Horse Comics. Kast was a low life thug who got the bright idea that in order to get ahead in the galaxy he'd impersonate Boba Fett and steal his reputation, his career, and his life. Jodo might have pulled it off, were he impersonating anyone other than Fett. He seemed to be doing alright at first. Easily getting contracts and appearing, for all intents and purposes, to be Boba Fett to the less discerning clients. His first mistake was running into Dengar, friend and occasional partner of Boba Fett, who relayed the meeting to Fett, thus confirming the rumors of someone posing as him. His second was--well impersonating Boba Fett. Fett goes undercover and poses as a client in order to hire Jodo and lure him to his demise. When Boba Fett unmasks Kast, he remarks that Kast is no one--not a former mandalorian warrior--a loser--a nobody. That doesn't phase Fett, he kills Jodo just the same. to quote the movie Hackers, "Mess with the best, die like the rest."
The Jodo Kast figure that Hasbro made available as a K-Mart exclusive is awesome! This Jodo Kast is different from the less articulated earlier release that featured a non-removable helmet. Although he shares a body with both the Evoutions Fett and the TVC Fett, he still looks great. He comes with the same accessories as Boba Fett, same blaster rife (though with different colored stock and a green strap), same blaster pistol, however the color schemes are all unique to Jodo. In the comics he appears in orange and green armor a slight variation to the red and green armor Fett wears. In other sources his armor is dark blue and yellow and his flight suit is a much lighter almost white color. The Hasbro rendering gives him orange-yellow and dark green armor. A very nice color scheme. His flight suit is much darker and has a weathered dark blue-gray color to it. Hasbro has rotated Boba's belt on Jodo so that his pouches face the back to make him look a bit different. He also has a unique "Jodo kast" emblem on his chest plate where Boba has his Mandalorian crest. Under the helmet he actually looks kind of tough--nothing like the pathetic sniveling mess Boba unmasks in Twin Engines. He looks a bit like Guy Gardner the Green Lantern from DC Comics, only with sandy brown hair. Hasbro delivers yet another awesome figure to us with their secondake on Jodo Kast. Definitely pick up a copy of Boba Fett: Twin Engines of Destruction and snag one of these Jodo Kast figures! Highly recommended!
Posted by (S)AFE at 10:43 PM