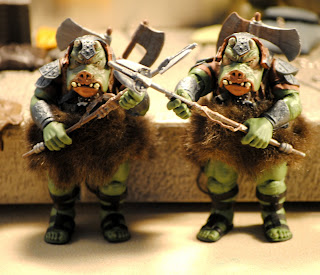 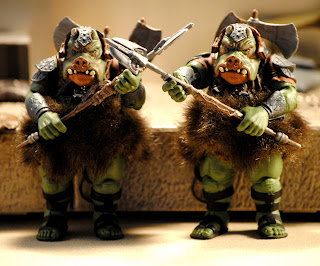 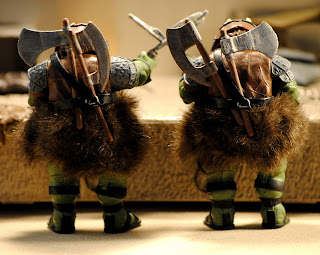 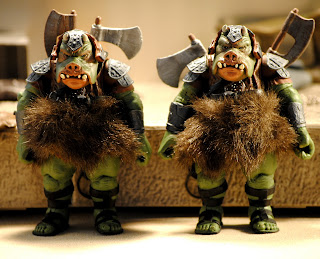 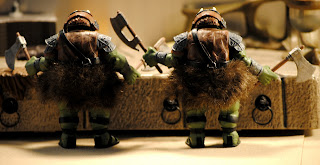 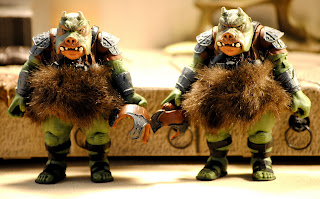 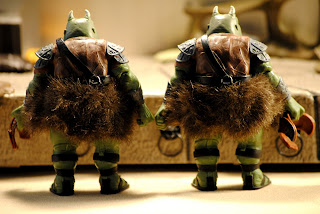 Gamorrean guards are awesome! They may not be the brightest bulbs in the Star Wars universe and they might drool more than Jabba himself, but they are awesome. They look a bit like a cross between something out of the Ninja Turtles or Duke Nukem crossed with a Roman Gladiator. These barbaric simple minded thugs can be found all over the Star Wars galaxy holding jobs as body guards, enforcers, muscle, bouncers, and are almost as tough as wookies. These guys look awesome with the Walmart exclusive Jabba's Throne set and Jabba's courtiers. Despite being fooled by Jedi mind tricks these guys still pack a heck of a punch. I remember fighting them in the old Star Wars computer game Dark Forces.These guys were part of the second wave of The Vintage Collection from Hasbro. They come with 2 long vibro axes and 2 shorter vibro battle axes, removable helmets, bandoleers, and soft-goods loin cloths. These figures are incredibly well sculpted. Out of all the figures i own (so many!) they are some of the most realistic, screen accurate, and well made figures produced yet. They are fully articulated, armed to the teeth (horns?), and ready for guard duty. Definitely pick some up if you can! They look best if you have more than one (think stormtroopers and how there's always at least 2 guarding doors). Trust me, I snatched up 2 the day they were released back in November. Totally worth getting 2! I might just have to get some more someday. Highly Recommended!
Posted by (S)AFE at 10:27 PM