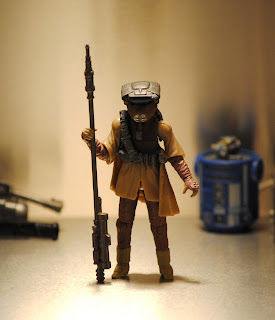 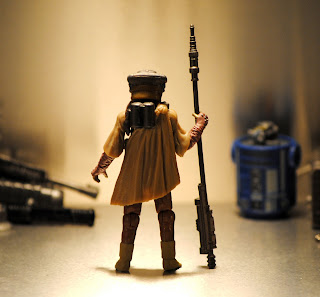 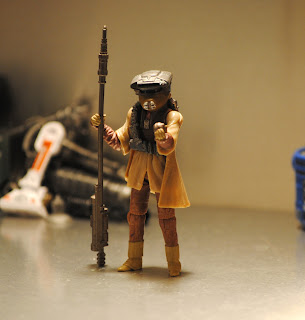 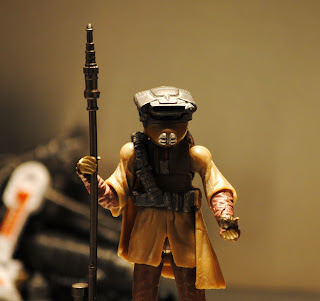 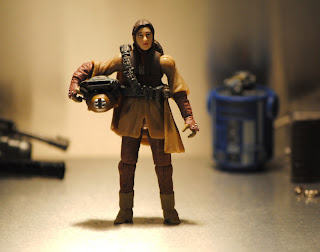 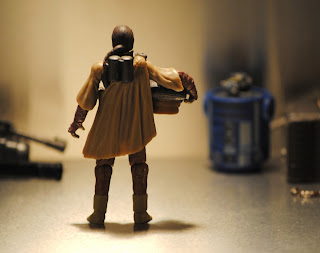 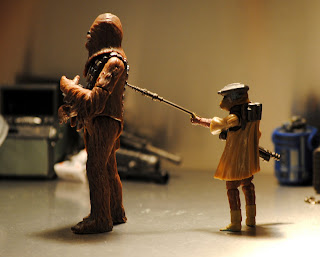 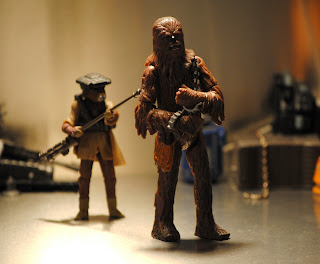 Leia acquires the outfit of the Ubese bounty hunter Boushh from the Black Sun. She dons this outfit to infiltrate Jabba's palace with Chewbacca as her captive as part of the Rebels' ruse to somehow get Han Solo back and out of the carbonite. Her plans seems to work at first. That is until she hastily tries to free Han and wakes Jabba who suspects foul play. She then is imprisoned as Jabba's personal slave girl and replacement of Oola (which Jabba fed to the rancor). Eventually the gang escapes but not without utterly destroying Jabba's sail barge, killing nearly all of his henchmen and courtiers--not to mention Boba Fett.

This Leia figure is awesome. A huge improvement over the POTF2 Leia as Boushh offering. She comes with her electropole, thermal detonator (with a peg that fits into her belt, and into her hand), a removable helmet, and a removable (however very difficult to do) bandoleer/backpack/cape. It's always strange as to how short the Leia figures are, that is, until you realize just how short Carrie Fisher really is. She's about 4'9. Tiny! Next to Vader or Chewbacca she's child sized. Still she's pretty tough. A better shot than Luke (at least in ANH. Seriously watch when he hands her the E-11 blaster!), she doesn't take any nonsense, never afraid to stand up for herself--oh yeah--and she strangles Jabba himself to death. It's easy to forgive the lack of articulation (in the elbows--they swivel instead of bend) and in the feet (solid ankles) because this figure is awesome! Maybe it's just the Ubese armor that seems so cool. They should really make some more Ubese characters and figures. Grab this as a Saga Legend (still on shelves) and upgrade your Leia figures! Highly recommended!
Posted by (S)AFE at 12:24 PM