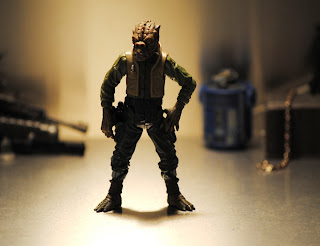 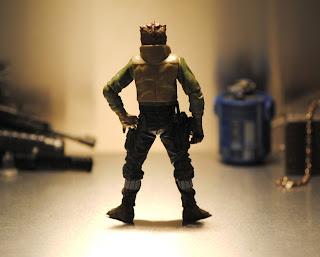 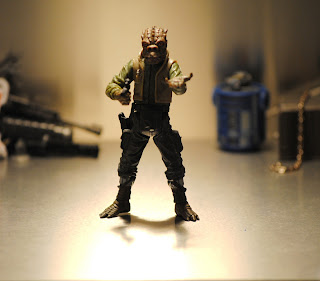 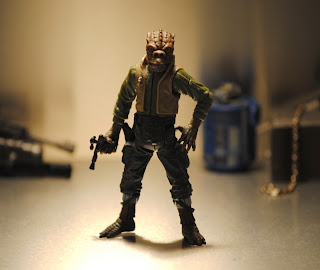 Hrchek Kal Fas, a Saurin Durkteel was a droid trader who visited Chalmun's Cantina when Luke and Obi-Wan were there. Saurins are a subspecies of the Trandoshans (Bossk's race) and share many of the same facial features, however they differed in that they have five fingers instead of three and opposable thumbs as well. Saurins also have differently colored eyes from Trandoshans. Hrchek Kal Fas's personal body guard was his cousin Sai'Torr Kal Fas a female Saurin. Hrchek Kal Fas had traveled to Tatooine in hopes to form a trade relationship with the planet's Jawas. While on Tatooine he heard about the Empire's reward for C-3PO and R2D2. When the two droids in question wandered into Chalmun's cantina he suspected they might be the droids the Empire was looking for. He tried to follow them out into the street but lost them. In addition to his cousin Hrchek also worked with a Ranat (rat-man like creature from Aralia) named Nevar Yalnal while on Tatooine. As an action figure part of the Legacy Collection Hrchek is pretty cool. He adds a Bossk like presence to the Cantina scene although he's a lot shorter than the Trandoshan bounty hunter. Lizard men are always cool whether they're bad ass bounty hunters or lowly droid traders, there's something that makes them stand out. Hrcheck comes packaged with a blaster that fits into a working holster and a cantina drinking glass (not pictured). He's full articulated and adds a great alien face to different scenes. There are Saurins seen in Chalmun's Cantina, in the streets of Mos Eisley, and in Jabba's palace. The costume used for Bossk was fabricated from a Saurin mask from A New Hope. Originally Saurins were referred to as "Crocs" "Crockers" or "Gila Men" during the production of A New Hope. The action figure version of Hrchek differs from the onscreen version in that he isn't wearing gloves or boots. Grab this Saurin and flesh out your cantina scene. Recommended.
Posted by (S)AFE at 3:33 PM