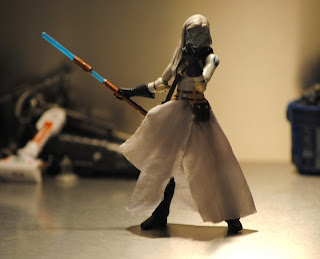 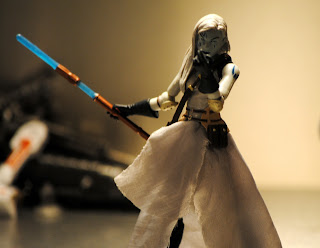 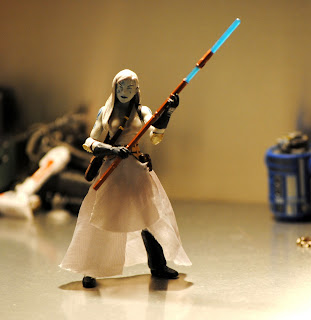 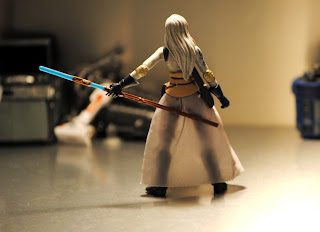 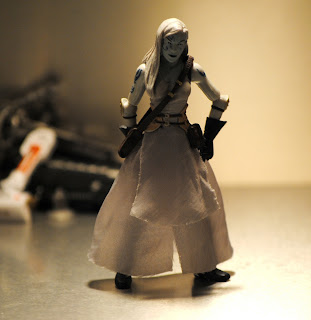 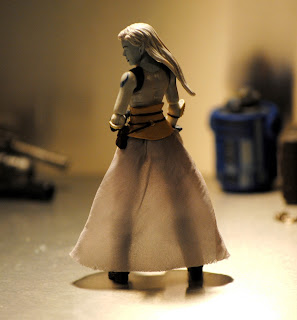 What is it about blue women that excite fanboys so much? The Navi women of Avatar, Smurfette, Mystique, Zhaan, The blue diva from The Fifth Element... Not only does Jarael (from the Knights of the Old Republic comic series) have blue skin, she also has white hair and pointy elf/vulcan like ears. Already she's a perfect combo for fanboys. To top it off she's pretty bad ass and can hold her own in a fight. She comes with a removable shoulder bag and her awesome shock staff. Which looks like some new (wait but it's old, right?) kind of lightsaber. She also features a soft-goods cloth skirt. I know what you might be thinking--under the skirt are knee-high black boots and tan pants with kind of a "Jedi" look to them. Maybe someday we'll get a slave bikini version? (KOTOR writers if you're reading this...) Sometimes Star Wars figures resemble actors, this may be intentional as the sculptors may use them for the basis for the expanded universe characters that don't already have actors portraying them. To me Jarael looks a bit like the actress Claire Danes and I think she'd be a good fit for her if they made the KOTOR comics into movies.

I personally really like the female characters of the Star Wars universe--they help to balance out the otherwise male-heavy stories. They also give us new and different figures--such as fem troopers and fem Mandos. Jarael is equal parts sexy and badass and is no exception to the rule of Star Wars ladies kicking butt. Add an awesome new weapon and a ton of articulation you've got one heck of a figure. She appears as part of the Entertainment Earth comic packs (which are sadly the last of the comic packs) and comes with Rohlan Dyre (the bad ass Mando). Definitely snatch these up before EE takes them down. Highly recommended.
Posted by (S)AFE at 10:05 AM