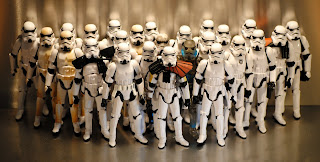 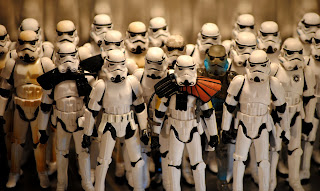 It's not often that the foot soldiers of the Galactic Empire stop "Killing in white uniforms" long enough to get them to pose for a group shot, but we were lucky enough to snag a couple. 25 assorted Stormtroopers, Sandtroopers, and even a Shadow Trooper posed for us before telling us "move along, move along". 25 troopers in all--just a few of the soldiers we have here at AFE--there's even an SDCC exclusive 501st Legion Trooper on the mid right. Good thing some Rebels didn't come along while we were doing this--took them forever to line up without falling over or bumping into each other. While you don't have to collect hundreds of troopers like we have, you should have some to fight your Rebels. Do you know where your Stormies are?
Posted by (S)AFE at 8:45 AM