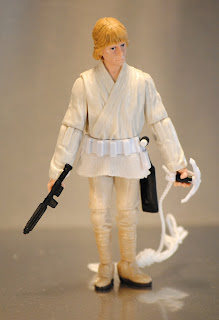 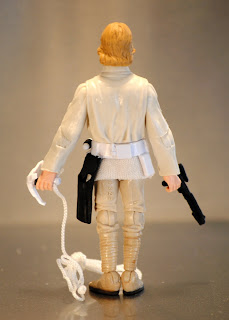 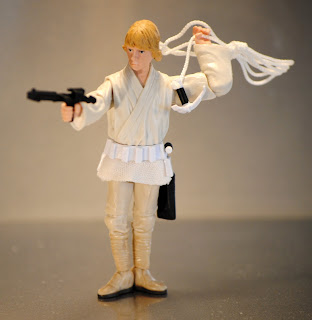 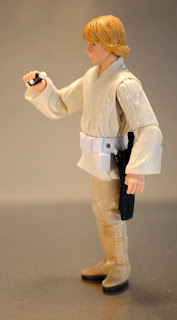 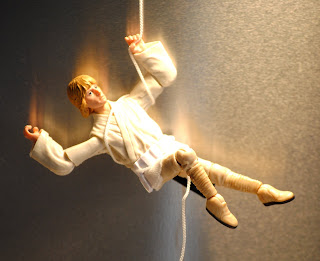 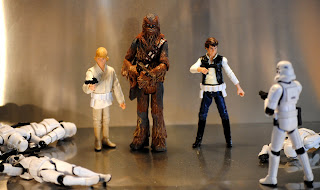 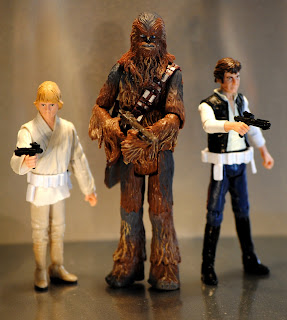 The most iconic Star Wars character ever. Luke Skywalker, the farm boy destined to defeat the ultimate evil, woo a princess (his sister, but don't ruin it for him!), and shake the galaxy to its very core! With Obi-Wan Kenobi to begin his Jedi training and guide him from beyond the grave, and Han, Chewie, '3-PO and R2, and Leia to accompany him on his adventures, Luke sets off to meet his destiny. Well ok so really he wines for three movies and is a pretty annoying kid, but he's still Vader's boy and does get kind of bad ass by Return of The Jedi. There have been tons of Luke Skywalker figures made over the years and nearly all of them sport ridiculously bad head sculpts. This figure is no exception as Luke's face looks more like the way he was drawn in the original Marvel Comics Star Wars run and nothing like a young Mark Hamill. The hair however is pretty accurate in its blond 70s tresses. We maintain here at AFE that the best Luke head sculpt to date is the Bespin Fatigues Luke that was recently re-released as part of the Target Exclusive Special Action Figure set. Although lacking movie-likeness this figure is overall pretty awesome. Chock full of articulation Luke comes in his Tatooine peasant gear after having changed out of his TK gear and features the classic Stormtrooper belt with a pop-on comlink and working holster, a grappling hook and rope from the "chasm swing" scene, a captured E-11 blaster, and a soft-goods bottom to his peasant tunic. Available as part of The Vintage Collection, this Luke was short packed into the TVC assortments with only 1 figure in each box! It took our Rebel spies here at AFE more than a few trips to Walmart to finally score this guy. If you can, find him and don't let go! Recommended!
Posted by (S)AFE at 6:31 PM