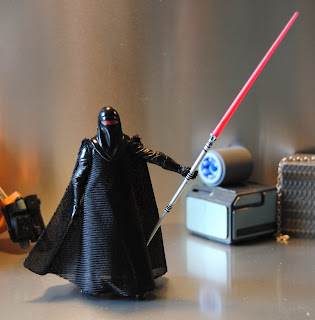 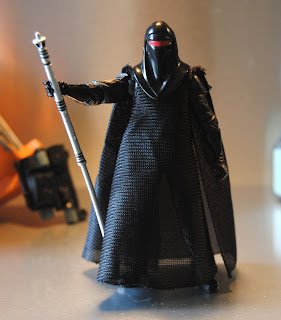 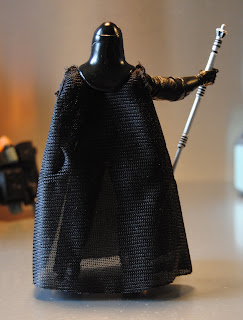 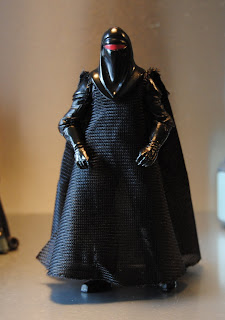 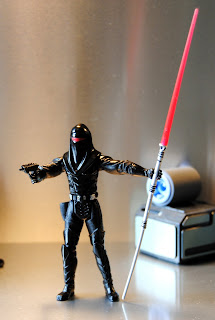 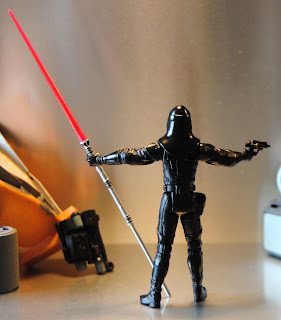 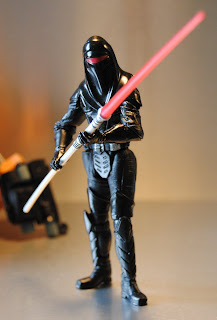 Out of the remnants of one of the most feared military power in the galaxy, the Sun Guard (Hasbro please make some figures of them!), formed on Thyrsus by a rebel group of Echani warriors, the Emperor built his legion of Shadow Guards. The Sun Guards were fierce foes of both Mandalorians and Echani. They became a Sith cult loyal to the Sith order and eventually were under Darth Sidious' command. The Sun Guard fought in the clone wars and eventually Palpatine absorbed the surviving members into the ranks of the Red Guards, Royal Guards, and for those that were force sensitive, Shadow Guards. Mostly unknown to most Imperials the Shadow Guards carried out the most deadly of assaults often utilizing Shadow Stormtroopers as their foot soldiers. One of the most elite, revered and feared units in the Imperial military machine, Shadow Guards wore black robes and armor and wielded saber pikes and carried blaster side arms. Hasbro's Shadow Guard figure released as part of the 30th Anniversary line is awesome! With a repainted Karnor Jax/Kir Kanos body (available together in a comic pack) and a solid helmeted head these figures strike a dramatic pose in any collection. Sporting a saber pike with removable blade, a scout trooper pistol, and removable black soft-goods cloak they come fully articulated and ready for battle. The only drawback to the figure is the fact that it has swivel elbows, otherwise an excellent looking figure! Recommended!
Posted by (S)AFE at 11:15 AM