RA-7: The Other Golden Droid! 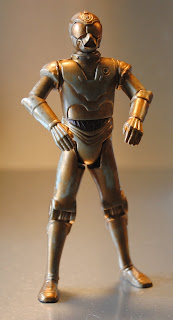 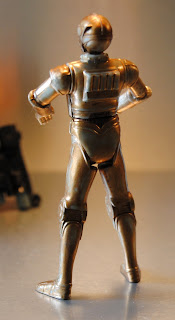 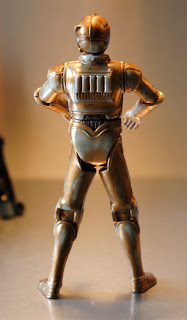 Commissioned for production from Arakyd Industries by the Empire, RA-7 droids were a third-degree low intelligence class of protocol droid. One striking feature that separates these droids from their 3PO counterparts is the notably insectoid looking heads they have.  RA-7 droids personalities differed from other protocol droids in that they were stern and monotonous--often contented to perform the basest of duties. They did sport a unique feature in a surveillance system housed in their heads--disguised as simple circuitry and buried deep in the droids cranial capacitor the device could record most any event that would be sent via remote uplink to Imperial Intelligence. Seen throughout the anals of the Empire--and thus the galaxy--RA-7 droids performed seemingly mindless tasks--although they were secretly spies. R2 and C-3PO run into one on the Jawa Sandcrawler in the beginning of A New Hope. This figure, released as part of the 30th Anniversary collection, while aesthetically very well done, lacks loots of basic articulation that is being added to the droids produced in more modern lines. Still an essential figure for your collection--better get more than one to keep tabs on your Imperials, it's not the best made figure by a long shot.
Posted by (S)AFE at 11:31 AM