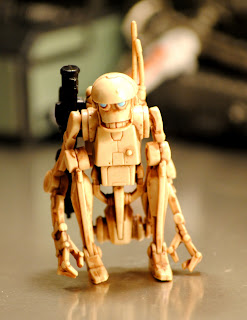 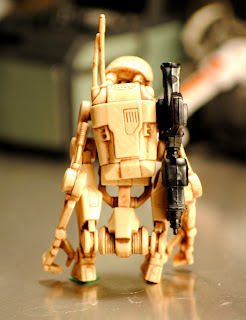 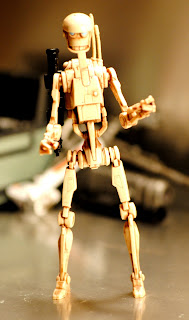 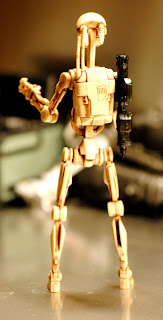 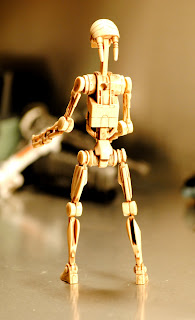 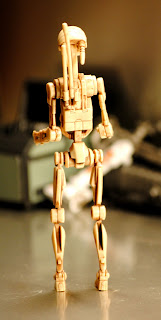 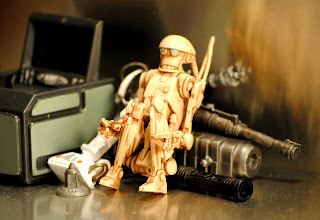 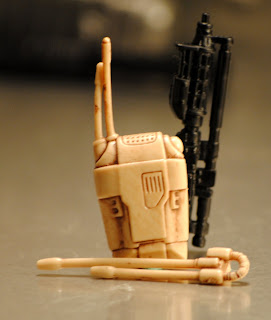 From the creators of the IG-88, IG-72, and IG-100 Magna Guards used by the Separatists during the clone wars comes the IG-97 series assassin droid. Constructed after the Clone wars IG-97s were sometimes referred to as Imperial Battle Droids. Sharing similar characteristics with the B-1 Battle Droids, but lacking the structural integrity and confident programming their predecessors had, the IG-97s were weak and unfocused. Thus they were discontinued from production by the Empire. Some still can be found throughout the galaxy--rotting in scrap heaps, employed as low-rate armed guards, or kept as trophies from a simpler time. One such droid shows up on Tatooine and comes to the aid of some swoopers when they run afoul of a Phase III Dark Trooper. Although not much good in a fight IG-97 does help out and the swoopers defeat the Dark Trooper. This awesome figure comes packed with Rom Mohc the creator of the Dark Trooper program and ranking officer aboard the Arc Hammer. IG-97 comes fully articulated and sports a a unique pop down/up neck, removable battle droid backpack, removable antenna, battle droid blaster, and removable head. IG-97 shares a body and backpack with the Geonosis Arena Showdown Battle Droid from The Legacy Collection. if you like droids then definitely add this relic to your scrap heap! Recommended!
Posted by (S)AFE at 9:11 PM