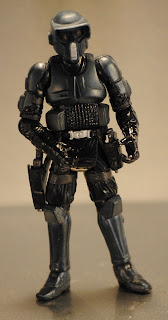 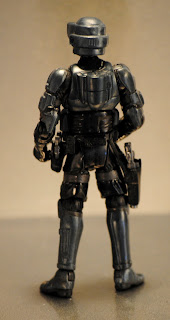 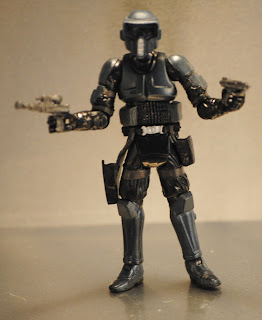 Also known as Shadow Scouts, Storm Commandos were tasked with instigating uprisings on Rebel friendly worlds, or quelling resistance movements on Imperial held worlds. Often second wave attackers, Storm Commandos were sent in to hold a newly taken planet after the first wave of an invasion force had left. Considered an elite unit within the Imperial Army were essentially black ops, carrying out stealth missions and covert operations. The Storm Commandos became a necessity on the battle field because of the guerrilla tactics of resistance fighters. Referred to as "Shadowmen" "Shadows"  or "Black Hats" by members of the Rebel Alliance, Storm Commandos were a force not to be trifled with. This Storm Commando is included in the Clone Commandos Evolutions three figure pack. Packaged with an ARC Trooper and a Republic Commando. This Storm Commando figure sports a more "concept-art" looking helmet and new shins, feet, holsters, in addition to standard scout trooper chest, thighs, and arms. He comes fully articulated and sports 2 unique blaster pistols! If your Rebel forces are growing too strong add a couple of these guys to thin their ranks. Recommended!
Posted by (S)AFE at 8:35 AM