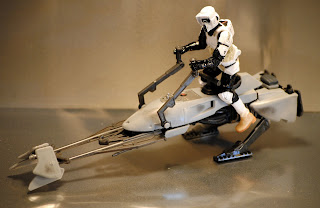 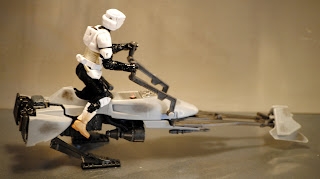 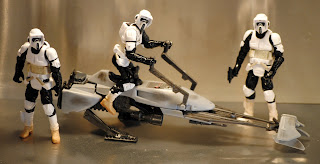 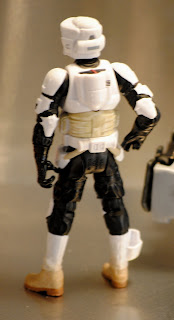 The first time we see Imperial Scout Troopers is during the Rebel raid on the shield generator on Endor in ROTJ. However we see them again in the battle of Kashyyyk in ROTS. In the special addition releases of the original trilogy films cold weather Scout Troopers have been added to the battle of Hoth sequences.  A more streamlined Stormtrooper, the scout troopers were designed to carry out reconnaissance missions and for sniping enemy targets at long range. Apart from their more "frontal assault" Stormtrooper counter parts the Scout Troopers wore lighter armor and had parts of their arms and legs free from armor for greater flexibility and mobility. Their vehicles of choice were often 74-Z speeder bikes which earned them the nickname of "Biker Scouts". Armed with a light hold-out blaster side arm, or in some cases a sniper rifles, Scout Troopers carried out demolitions, hit-and-run fade attacks, sabotage, and left the heavy combat to the other troopers of the Stormtrooper corps. If your Imperial Army is to succeed you are definitely going to need some Scout Troopers in your ranks! So load up on them and head out in search of Rebels! Also snag some speeder bikes too while you're at it! Available from many modern figure lines and waves,from the Original Trilology Vintage Collection to the legacy Collection.  Highly Recommended!
Posted by (S)AFE at 9:17 AM