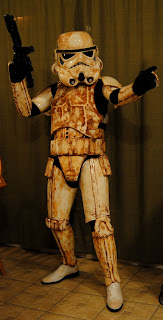 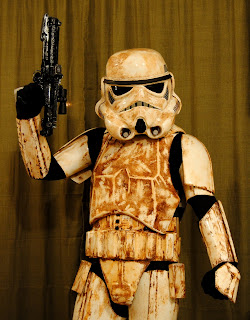 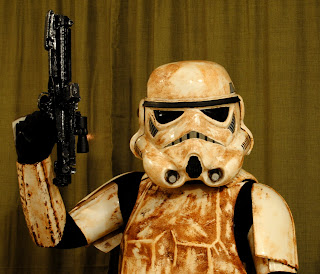 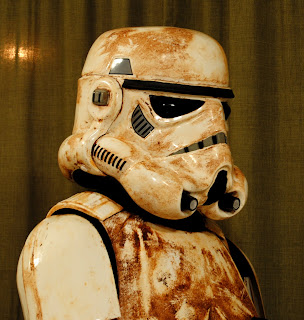 Here is TK-9849 of the 501st Legion. He's fresh off of an extended stint in the deserts of Geonosis. He comes fully articulated and features an E-11 blaster with working holster (not pictured) and thermal detonator (not pictured). Definitely a one-of-a-kind trooper. Not available for retail and never actually produced by Hasbro. TK-9849 exists to serve the Galactic Empire. Fiercely loyal he carries out his orders with seldom a word and with no emotions. Don't miss out on this figure! Appearing in select locations!

"What're you looking at? My armor? So I tripped off the drop ship ramp and fell in the mud! So what? Yeah my squad mates laughed at me at first. Said I'd be reprimanded by the COs for it. Until the first Rebel sniper shot took out the sergeant. Right in the faceplate. That stopped the laughter. See, shiny white armor sticks out like a sore thumb--pretty much anywhere. Once the Rebels got that first bead on us, the laser fire fell like rain. Tore the squad up pretty bad, and fragged the stabilizers on the drop ship. We beat it double time to cover. After that those of us left, we dug in. We muddied up our armor, dirtied the shine out of it, and we adapted. We survived. Some of us are still out there, dug in so deep, striking silently against them, sabotaging what they try to build, and accomplish, before meltring back into the shadows. I've had whole patrols march right past me--smelled the Agaric ale on their breaths. Watching them. Waiting. You want to find us? Leave no stone unturned. You won't get lucky. We're Ghosts now."