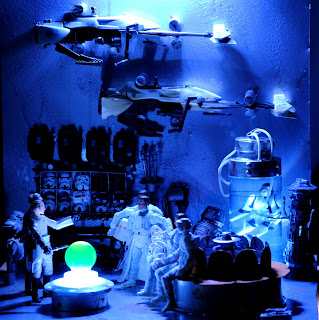 You may remember the post about the Imperial Ready Room diorama we constructed here at AFE. Well even if you don't, we participated in the Trash To Treasure Contest featured/powered by ISY and hosted by Master Custom Builder Luke Sprywalker of LSC. The object of the contest was to create a unique item for the Star Wars Universe made using only trash and recycling materials. AFE chose to do an Imperial Ready Room--a room where troopers, pilots, officers, and other Imperials can gear up and get briefed before missions. While the structure is 100% made from scraps we were allowed to add props and other preexisting Star Wars items. We had a total blast creating this diorama! It features tons of gear storage, a "working" holoprojector table (with LED lights), a "working" bacta tank with submerged trooper and "real" bacta (with LED lights), Speeder bike storage, lounge seating built around a reactor, and more! It was a great opportunity to get such a cool concept for a contest and the first custom building contest we've entered as AFE! We were honored to enter and participate. A big thanks and appreciation for the awesome diorama built by Ars30 of ISY as well! To top it all off we were voted the best Diorama! We would have settled for just being able to create something and enter it, but heck, this is awesome too! Thanks to the ISY crew and LE!
Posted by (S)AFE at 10:51 PM