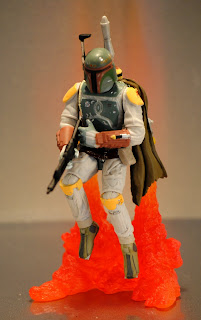 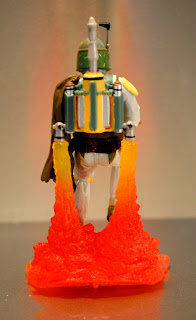 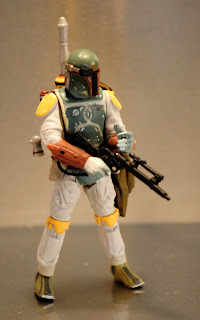 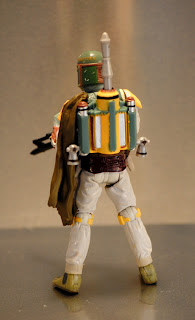 As Hasbro (and other toy producers) moved from the stiff, poorly articulated, figures of the 80's and 90's (aside from GI-Joes which always had more articulation) they also began to improve the details of their figures. The POTF Boba Fett was very stocky and featured only six points of articulation. He did come with a removable shoulder armor/cape/Wookie braids, a removable (giant) jetpack, and some very chunky blasters. This Fett (pictured above) begins to bridge the gap between the chunky POTF figures and the sleek hyper-articulated figures we know and love today. Sporting at least twelve points of articulation--twice as many as his predecessor and a non-removable jetpack, he also has a built in quick-draw action feature--squeeze his legs and he pops his arms into a ready position. I myself have never been a fan of the quick-draw nor action features altogether. I find they to take away from the naturalness of the figure and often when they are present the designers will sacrifice some articulation for the action feature.  Sharing pieces from the Vintage Original Trilogy Collection Boba Fett, and the Pit of Carkoon Boba Fett (The Clone Wars style blue and white packaging), this Boba Fett comes with a Return of the Jedi paint job, his signature EE-3 blaster rifle, a blast-flame pop-on base, removable rotating antenna, display stand and a random hologram figure. This Fett is more of a semi-articulated display model and looks great blasting off on your shelf. Not my favorite Fett by any means, but a cool looking figure with some eye-catching effects. Pick him up is you don't already have one!
Posted by (S)AFE at 5:04 AM