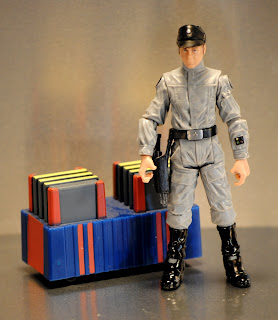 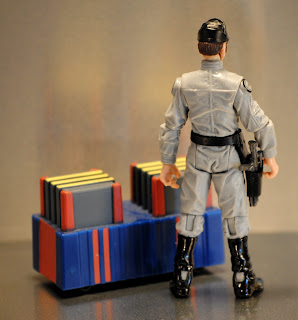 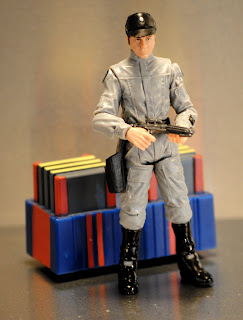 I'm not sure why but this is one of my favorite figures! These guys and their other gray-jumpsuited counter parts are the glue that keep the well oiled machine of the Empire running. Since that fateful scene in A New Hope where they board the Falcon to search for crew and cargo I've always had an appreciation for them. I really like non-combat, background shot, "guys moving crates" type characters. They help to flesh out societies and military forces. This awesome figure comes with a scanning box on a "hover sled" that features real wheels, an E-11 blaster rifle with real working holster and a sculpted on officer's hat. Two improvements, Hasbro get your datapads ready to record, that should be worked in, a hover sled controller (like the one seen in the movie) and a removable hat. Also it'd be cool if they had more than one head sculpt like they did with the Imperial Officers (black uniforms). Either way I have two of these guys to unload boxes in the background, scan "abandoned" freighters, and get knocked out by smugglers and their friends. Come to think of it, what ever happened to those two scanning crewmen that Han and Luke got the drop on in the Falcon? Loop hole? I think a "Tag and Bink" style comic is in order for them! Grab a few of these guys! Recommended!
Posted by (S)AFE at 9:45 PM