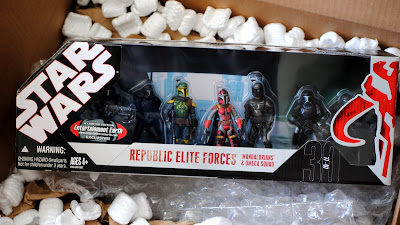 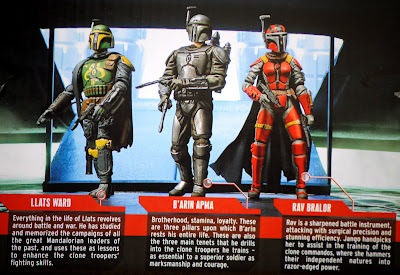 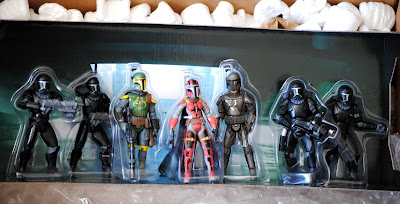 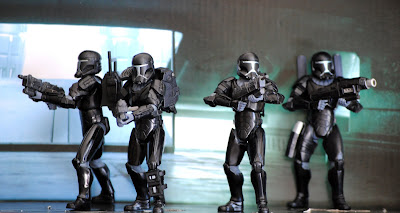 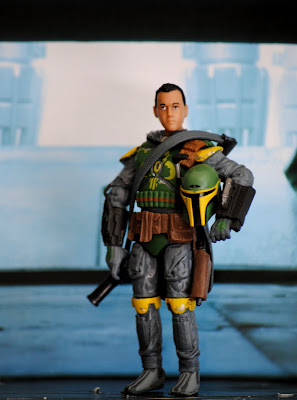 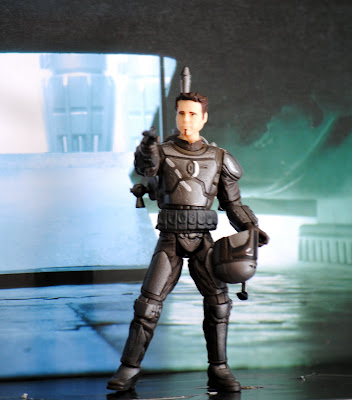 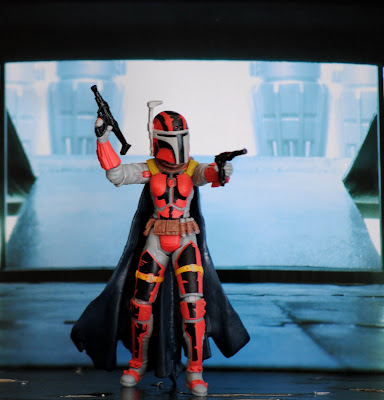 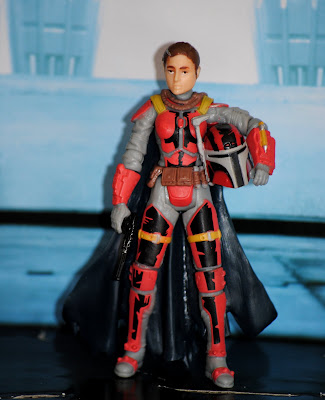 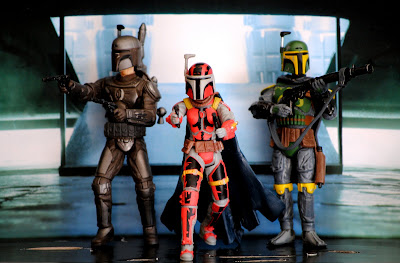 Overall a great set and I'm happy to finally get my hands on it after a few years of panting over images of this and its twin set offered to us from Entertainment Earth. This seven figure set offers us three new Mandalorian warriors and Delta Squad's compatriots, Omega Squad (a repaint of the aforementioned Delta Squad of Republic Commando video game fame). We get Llats Ward, B'Arin Apma, and Rav Bralor in this set. Llats Ward (assembled from parts of one of the first hyper articulated figures made of Boba Fett and the Fett Legacy version) is a well done figure with lots of articulating and a famliliar Green and Yellow Mando paint scheme. Rav Bralor (Perhaps the most interesting figure in the set) offers us one of the first (the other being Isabet Reau) female Mandalorians with an interesting orange-red, black, yellow, gray, and blue paint scheme and tons of articulation. More recently EE added their Joker Squad set with the first ever official Femtrooper figure (of Jes Gistang) but here we get a female mandalorian! Sexy, dangerous, and a force to be reckoned with, Rav Bralor is one of my new favorite figures. The third and final Mando is B'Arin Apma, based on pieces of the Kamino Escape Jango and some newer articulated legs and removable helmet. Some fatal flaws exist with B'Arin, namely the lack of articulation, the same signature guns as Jango Fett's, a helmet that fits too snugly on his head and thus pops his head off inside the helmet when you try to remove his helmet. There's also the fact that he has an extremely long neck which is left exposed even when his helmet is on as far as it'll go. It's almost an invitation to be sniped in the neck. The members of Omega Squad are repaints in black and light purple of their counterparts, Delta squad, with the same minimal articulation and accessories. Overall a really unique set and a must have for anyone who loves Mandalorians. Despite their lacking articulation (some more than others), once posed, they look pretty stunning. The backdrop shelf included adds a nice "just deployed off the dropship" effect. And the "dropship" in the background sports two Mythosaur emblems on the hull. As far as I'm concerned, the more Mandos the merrier!
Posted by (S)AFE at 8:48 PM