High Ranking Imperials to the Board Room!

And now a very special episode of "Scenes We Never Got to See" acted out, for your viewing/reading pleasure with Hasbro Star Wars Figures, enjoy:

Grand Moff Tarkin: "I was driving my shuttle down the spacelane when I thought I saw a junky looking YT-Freighter blast past me in the starship-pool lane, a young man in clothing only a dirty smuggler with a wookie for a best friend would wear yelled out the window, "Move it or lose it Old (Republic) Timer!"... Well that was about the time when I..."
Other Imperials [Yawning]: To themselves: GROAN! "Not again!" "Not another 'Grampa Tarkin' story!" "Make it stop!"
Vader [Humming to Himself]: "Doo-da-doo, da, doo-da-doo, doo-doo-oo-oo, doo da doo, doo da doo, doo da doo doo doo-da-doo..." (to the tune of the Mos Eisley Cantina band song). 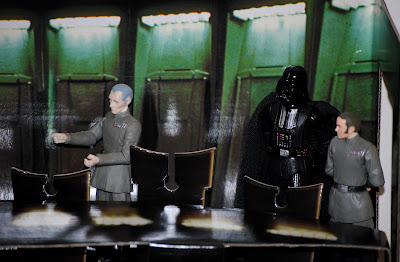 General Tagge [Nudging Darth Vader][Whispers]: "If I have to listen to another of Tarkin's rambling stories I'll space myself. Use that 'all powerful' force of yours and do something to get us out this meeting!"

Vader [Clears throat]: "Shall we break for some tea and biscuits?"

General Tagge [Rolling his eyes][Hissing under his breath to Vader]: "Not what I meant!" 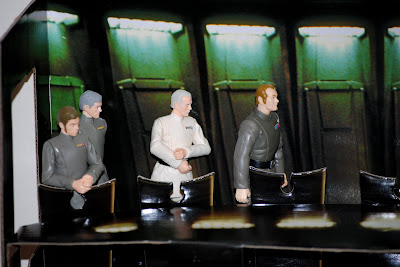 Tarkin [Cutting himself short]: "--and there was another problem with--Yes lets be seated and begin shall we?"

Vader [nonchalantly]: "You got is Boss."

Vader: I Find your lack of chewing, disturbing! Here allow me! [Grips the cookie lodged in Motti's throat and crushes it]


Overall an awesome set, mostly due to the fact that it's based directly on one of the all-time greatest Star Wars scenes. Where the line "I find your lack of faith disturbing." is uttered by Darth Vader, and we get to see just how badass the force is. However the articulation is a bit dated. But still a great way to get some more Imperials to boss around the lower ranks of my Imperial army. Also a great supply of E-11 Blasters, as Ranking Imperial Officials rarely use them, they're free to go to those that need them on the front lines... or fall into the 'wrong' hands of the rebels or the scum of the Star Wars underworld. I recommend snatching one of these sets up, for the amazing diorama it comes with as well as the figures. Got mine at about $10 below the original retailer price. Huzzah!
Posted by (S)AFE at 8:55 AM