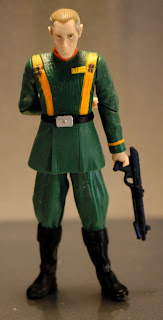 Before he was a Grand Moff and holding Vader's leash, Tarkin worked his way up through the Republic Senate. He even had a run in with the wily youth, Princess Leia, who among teasing Tarkin, also dropped a water balloon on him, sullying his above dress uniform. Destroying Alderaan seems a bit of an over reaction, but some people hold grudges. This unique Tarkin figure is from the Comic Pack series and comes with a poorly articulated Stormtrooper and the comic in which Tarkin first meets Leia. Although he lacks some of the articulation we've come to expect from the modern figures, this Tarkin gives us a glimpse into the past of one of the most notorious Imperials in history. Get yours today! And start building your Republic Senate!
Posted by (S)AFE at 7:37 AM